Still recovering from a gunshot blast to the chest, Warin Taphaothong would rather die than disappoint the dogs. On the heels of yet another surgery to address deep infection, Warin is back “at work”.  Today she wears a gentle smile and a light polka dot apron as she climbs onto her motorbike with a dozen magnificently large pots of food for the strays. The wheels on the bike’s cart squeak and whistle under the weight of so much hot rice and chicken.  Her sister Lem tries to stop the pots from tipping as the two disappear down the road. It won’t be long before the swarm of wagging tails emerge to greet them. 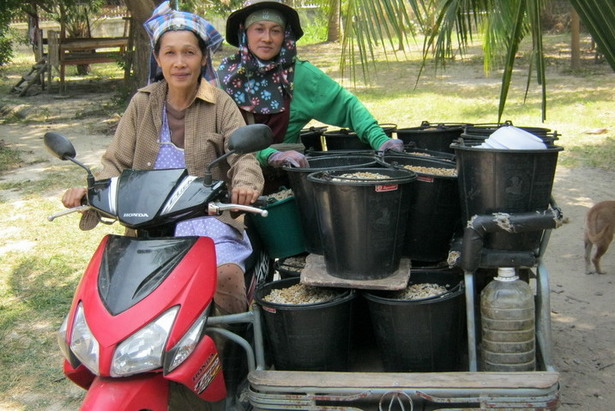 Last year, Warin was thrown to the ground by her brother-in-law Dom when she tried to protect her nephew from yet another beating. Enraged by her interference, Dom (who was a killer-for-hire) shot Warin in the chest. By some miracle the bullet veered away from Warin’s heart and instead went clear through her lung and into the ground below. Unconscious, Warin was rushed to a hospital in Bangkok while her brother-in-law began firing at the police who surrounded him. Dom took only a single bullet to the leg, but was never jailed.

After her long hospital stay, Warin agonized about the dogs. For years she had not only cared for the dogs at her sanctuary, but also in the community where she delivers food to street dogs and organizes spay/neuter projects, an unheard of ministry in Thailand. But for months after the shooting, Warin was unable to return to her sanctuary because Dom (unpunished for his crimes due to his political connections) remained free and steadfast in his vow to finish what he started. It was only after Dom’s unexpected and sudden death from cancer (perhaps a karmic slap) that Warin could return to the dogs who had lost so much during her absence. 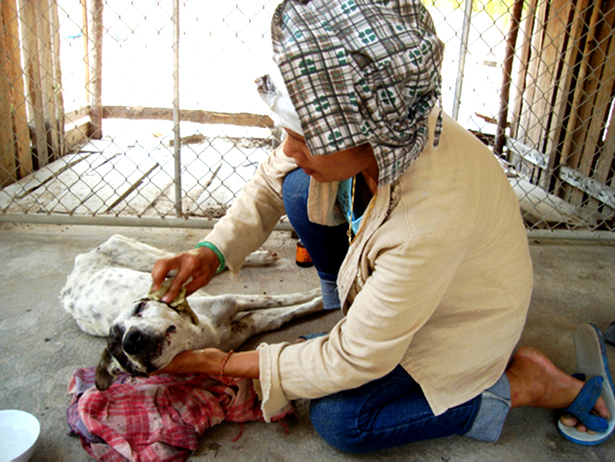 “I am still in pain of being shot down through my chest and it is a wonder that I did not die according to the doctors,” Warin said. “According to my religion, it was my help to so many stray dogs that took care I did not die .”[/caption]

Warin’s sister Lem and other volunteers had done what they could to feed and care for the dog’s during her Warin’s absence, but without the proper experience, they struggled greatly. Food shortages, disease outbreak and a major flood compounded the hardship at the rescue center. On top of that, the women were unable to settle the dogs who barked constantly, and consequently neighbors’ complaints have now forced the sanctuary to  relocate.

“It’s going to take 1,000 hands to heal this situation,” Harmony Fund Vice President Daria Justyn said. “I look at this tiny woman and I see giant. She has such purpose, such a profound impact on the animals around her. We can’t count the number of animals who have benefited from Warin’s care and now it’s up to us to come together to help her carry on. We must set up shelters, fencing, utilities and bring in all the supplies needed to care for the animals in their new location.”

“The dogs are fed a mix of rice chicken fish and dog food,” Warin said. “It depends on money how much real dog food, chicken and fish I can put in. Sometimes I only can give them rice.”[/caption]

A parcel of land near the base of a mountain in a nearby area will become the new home to the sanctuary. It will have the capacity for electricity and city water, and Warin dares to dream of a proper kitchen to cook for the dogs. There is potential to create a sick bay for dogs who need to recover in isolation, and with no neighbors nearby, the dogs can be free to ‘speak’ as often as they’d like.

This is one of three rescue centers in Thailand who are counting on the Harmony Fund for immediate aid. We would be very grateful for donations to help.